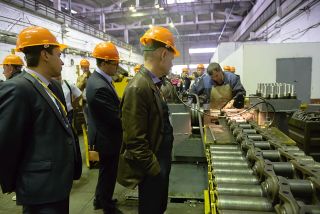 On the May 24th, Cheboksary hosted a meeting between the heads of CHETRA-PM JSC and CHETRA LLC with end-users, during which the participants of the event were able to learn more about the strategy of enterprise development, as well as to visit the manufacturers themselves.

The main event of the day was an expanded meeting with the representatives of the Concern Tractor Plants, Vnesheconombank and the Head of Chuvashia. The participants of the meeting summed up the first results of the implementation of the financial rehabilitation program of the concern, approved by VEB's supervisory board in December 2016, discussed the bank's participation in the development strategy of civil division enterprises and the launch of production processes and the increase in production volumes.

VEB's Deputy Chairman Petr Zolotarev noted that support from the bank could allow the enterprises of the civil division to achieve profitability in the second half of 2017. In turn, the Director General of the concern Albert Bakov noted that for further effective activity the concern needs to continue investing in NIOKR and developing promising samples of import-substituting equipment and its components. After the meeting, consumers were invited to the tour to the plants of the civil division of KTZ, located in Cheboksary. So, they were able to walk through the workshops of "Cheboksary Aggregate Plant" JSC  and see the production cycle of manufacturing spare parts and components for undercarriage systems for industrial and agricultural machinery of Russian and foreign production. At the "Promtractor" JSC  plant guests were shown the process of assembling the CHETRA dozers on the main conveyor, the shop of transmissions with the Mazak automatic line, the cab assembly shop and the paint shop. At the end of the tour the guests were presented with the CHETRA technique in action on the demonstration site.

Guests of the event also visited the Museum of the history of the tractor, where, in addition to the main exposition, they were able to visit the personal exhibition of the artist Alexander Simakov devoted to the pioneers of the Cheboksary plant of industrial tractors.